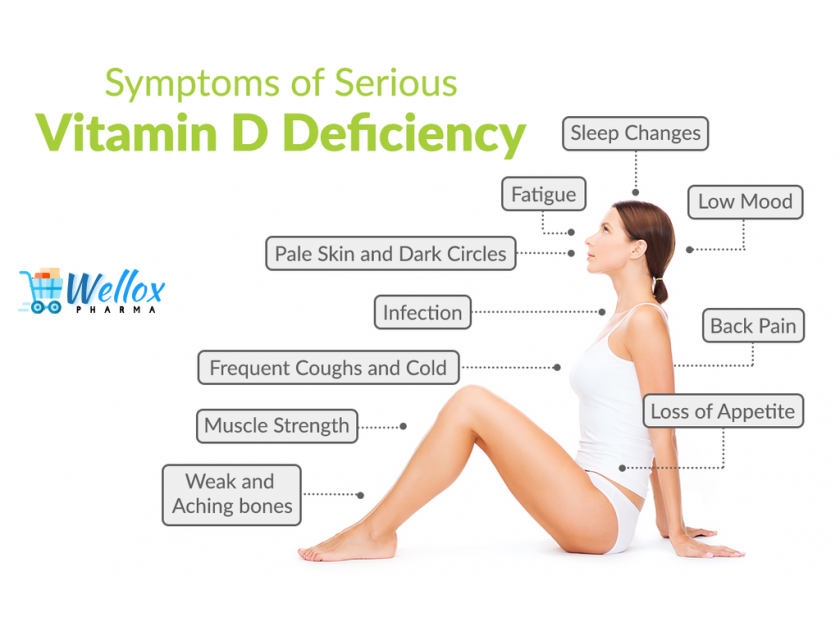 It’s been all cliche when I say vitamin D, and you immediately think about the Suns and the bones— well, that’s what half the world do.

But vitamin D has much more to offer to your body than we have been linking it throughout our lives.

And you will see its use beyond toughening your bones and inducing calcium in the bloodstream once you get to know about the symptoms caused by its deficiency.

It’s recommended for you to administer requisite Vitamin D into your body so that you don’t face the underlying issues led by its deficiency.

So, let’s leap forward to find out what do its deficiency do to your body.

The influence of Influenza.

You don’t want to get influenced by the Influenza virus, do you?

Influenza is a respiratory infection which causes flu and cold, and severe fever in extreme cases.

A lot of studies have distinctly associated vitamin D deficiency with Influenza; however, the only question which triggers the medical researchers is whether it’s a therapy or preventative measure.

One of the studies tried to find out the answer in which it states that it’s complex to find the answer whether it’s a therapy or preventative measure; howbeit, it confirms that maintaining the optimum level of Vitamin D keeps the immune system at check, thereby fighting the infection. [1]

The depression takes over your body.

“Where’s all the sunshine,” asks one of the studies which try to explore the link between vitamin D and depression.

I hope depressed people don’t read Vitamin D as Vitamin depression because it can make them comprehend things which they shouldn’t.

Depression is generally caused by serotonin and dopamine deficiency whereas other mental disorders such as Schizophrenia is caused by impaired serotonin synthesis and Omega-3 deficiency. [2]

While hormonal deficiency leads to these mental issues, what role do vitamin D play?

Other studies have discovered that Vitamin D can enhance the level of serotonin in the brain. [3]

The heart forgets to pump.

Well, that’s the last thing you’d expect from your heart, i.e., to forget pumping the blood to the different parts of the organ.

But it can happen over a brief course if you don’t give enough vitamin D to your body.

Another finding distinctly shows that people with weak heart functioning can suck up enough vitamin D to enhance cardiovascular proceedings. [5]

The study confirms that vitamin D improves heart pumping by 8% in the older people who don’t get enough supply due to lesser exposure to the sunlight.

Even your respiratory system gives up its job.

Things are getting on nerves now— first your heart and then your respiratory system.

It seems as if the entire world is conspiring against you because you refused to intake vitamin D.

Yes, you will likely find it difficult to breathe if you haven’t got enough vitamin D mineral into your bloodstream.

Although the role of microbes and infection on asthma has been debated for centuries, specific findings report that treating respiratory-infection improves the airway, thereby leading to the natural breathing process.

As Vitamin D has anti-infection properties, submitting yourself to enough of it could choke your asthma to give you a healthy respiratory pipe. [6]

Your penis wouldn’t salute your girlfriend.

Akin to your heart and respiratory system, your penis may refuse to stand tall when it comes to making intimate relationships.

One of the examinations shows that lack of vitamin D may contribute to the clogged arteries.

It may well spread to your penile region where it’ll face difficulty in conducting the blood necessary for an erection. [7]

Another study has also demonstrated that people having erectile dysfunction have a low volume of Vitamin D into their system in comparison to the non-ED patients. [8]

Hence, vitamin D is more important than what you’ve been thinking— probably, it’s why we have the mighty sun right above us to take care of its level.

PREVIOUSPAPAYA— DOES IT GIVE YOU A HARD ERECTION?
NEXTQ&A RELATING TO PENIS